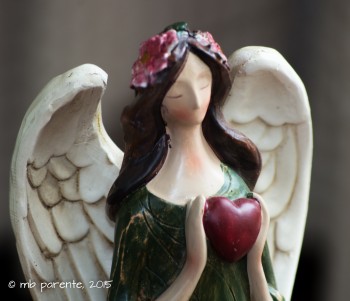 Yesterday, a memory from about 55 years ago was brought to mind.  It was a very difficult time from my perspective as a child, as I’m sure it was from the perspective of my Mother.  While I’d thought about it before, this time the feelings were transformed.  It was the Angels’ message that accompanied the memory that brought a flood of understanding and emotion, pulling me to view the scene differently.  … Do not see the sadness, or the lack, in this memory… see the love to provide what was possible at that moment... do not worry about the things you cannot do, or change … let go of feelings that may say ‘it is not enough’…  Whatever (you) can do in any experience, do it with love… that is all that matters…

In this Thanksgiving morning’s Session for Clients, the Angels sent an endless stream of loving energy.  It seemed connected to yesterday’s message…to bring comfort and an alternative perspective to whatever is troubling or feels like a burden.

During an early morning meditation today, a message came through from the AA Michael.  It seemed to come as a response to my struggle (and I imagine there are many of us are struggling) with feelings about recent world events.  There was so much outcry over the past week … understandably so, but I felt at a loss in what felt like the choosing of sides.  During the meditation, I was shown an image of beams of light coming from me.  That was followed shortly by my seeing the image that you see in this photo.  The image was to be captured and posted with their message "to make this day one of Light and Love."

More of the message came through following the post and that is detailed below, but I realize now that the message actually began two days ago when I read and viewed a YouTube video tribute to Carl Sagan’s The Pale Blue Dot.  It seems significant to share it all with you.

Watching the video I was reminded of a rather cherished memory from almost nine years ago when my oldest grandson was about three.  It seems that day in pre-school the children were learning to memorize their address … where they lived …. He told me that evening “I said, I live on the Earth."

Fast forward to this morning.  Following the posting of the photo, I was given an image to help me gain perspective.  I hope I can sufficiently bring that to you.

Imagine a much smaller earth and you are one of many people, all standing together as far as your eye can see …  people in front of you, behind you, to your right, to your left … all you see are people.  You notice there are no countries … no borders … no oceans … they are not visible … only people are visible.  I was told that it is from that perspective that I should find my feelings on the events.

This morning, the Angels, led by AA Michael, guided us to radiate light, but there would be more that they had to say.  Referring to the outcry, anger, and arguments among us, they said we are … creating division among the peaceful population by shouting our upset and taking a stand for one approach over another.  We should not create this division.  They wanted to provide a way … to bring peace to your own feelings… these images are to provide a perspective.  You can imagine your ability to radiate beams of light … you have this ability … use it!  Be it!  Focus your attention there (on the light).  Decisions will be made … a direction will be taken.